QueenPammie / Mar 09, 2016
So in the wee hours of April 26th of this year, a wild Pammie was gazing at Zone chat shortly before having a complete and thorough breakdown over the unorganised chaotic misogynistic and selfish behavior of the EP as a whole.

A few Stormies were grouped together and somebody came up with the mad cool idea, to go get BRINDLE...and totally own that thing #BrindleIsLove so after being distracted by a few errant DC on their way to join in the endless Alessian Bridge madness, we stole an AD takeover of Nikel (oh they were NOT happy standing on the 2nd flag wondering why they were all dead!) took the Keep...and sat there. Nothing. Nobody was interested!

So now we have Kings>>Arrius>>BRK>>>Alessia, and brindle and nikel...so...we decided to connect the dots! Rayles was our next goal, with a DC held scroll of ours, a little overwhelmed with confidence, we stupidly wiped on the NPCS D'OH! But rallied and smashed ROEBECK, ASH, then RAYLES, ran the scroll back with some very clever DC resistance!, then GLADE, ran that scroll back, while we picked up the Northern DC gate scroll, them we smashed open WARDEN while a 2nd group picked up the Southern DC gate scroll and we an them BOTH back together same time! 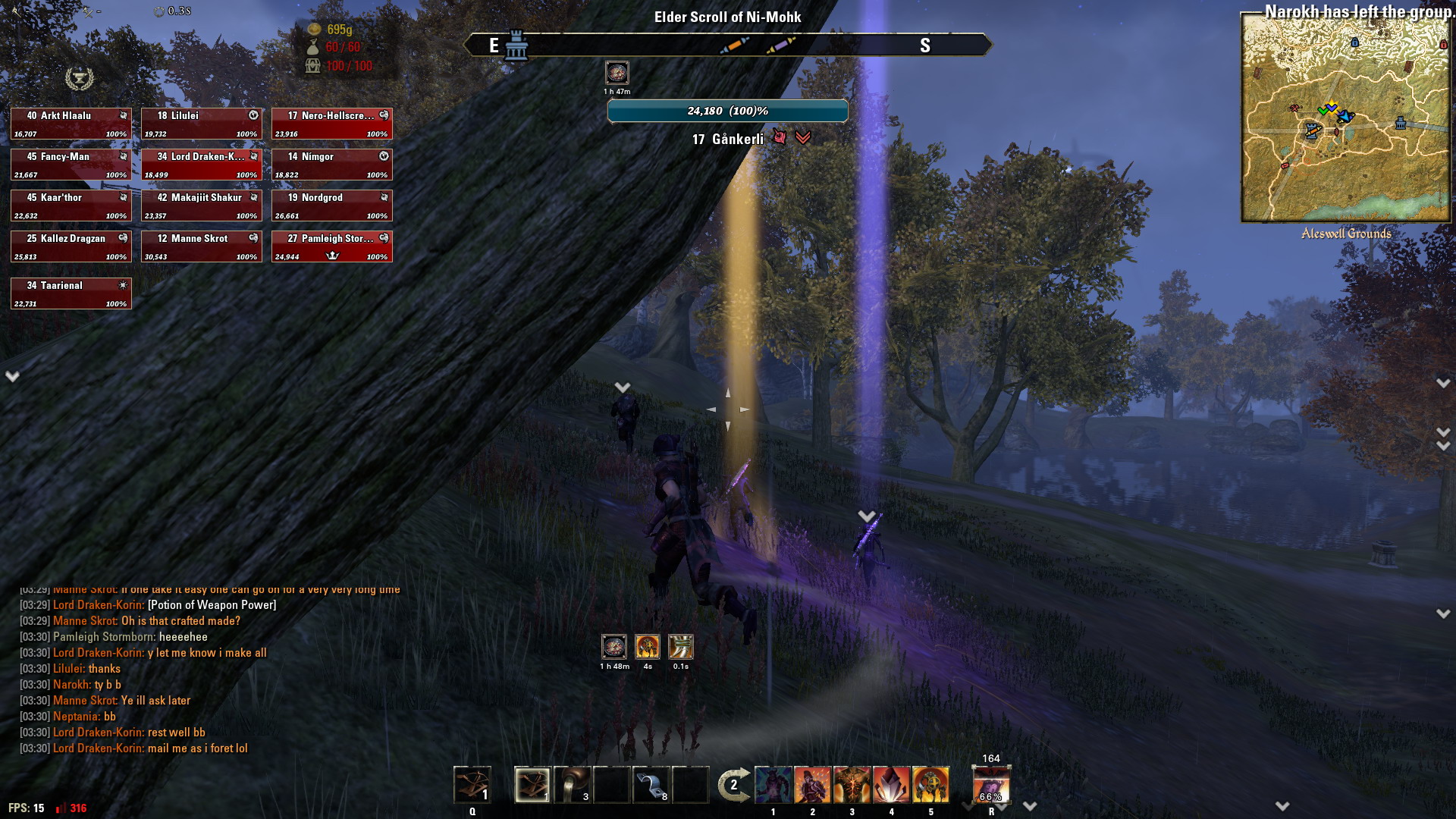 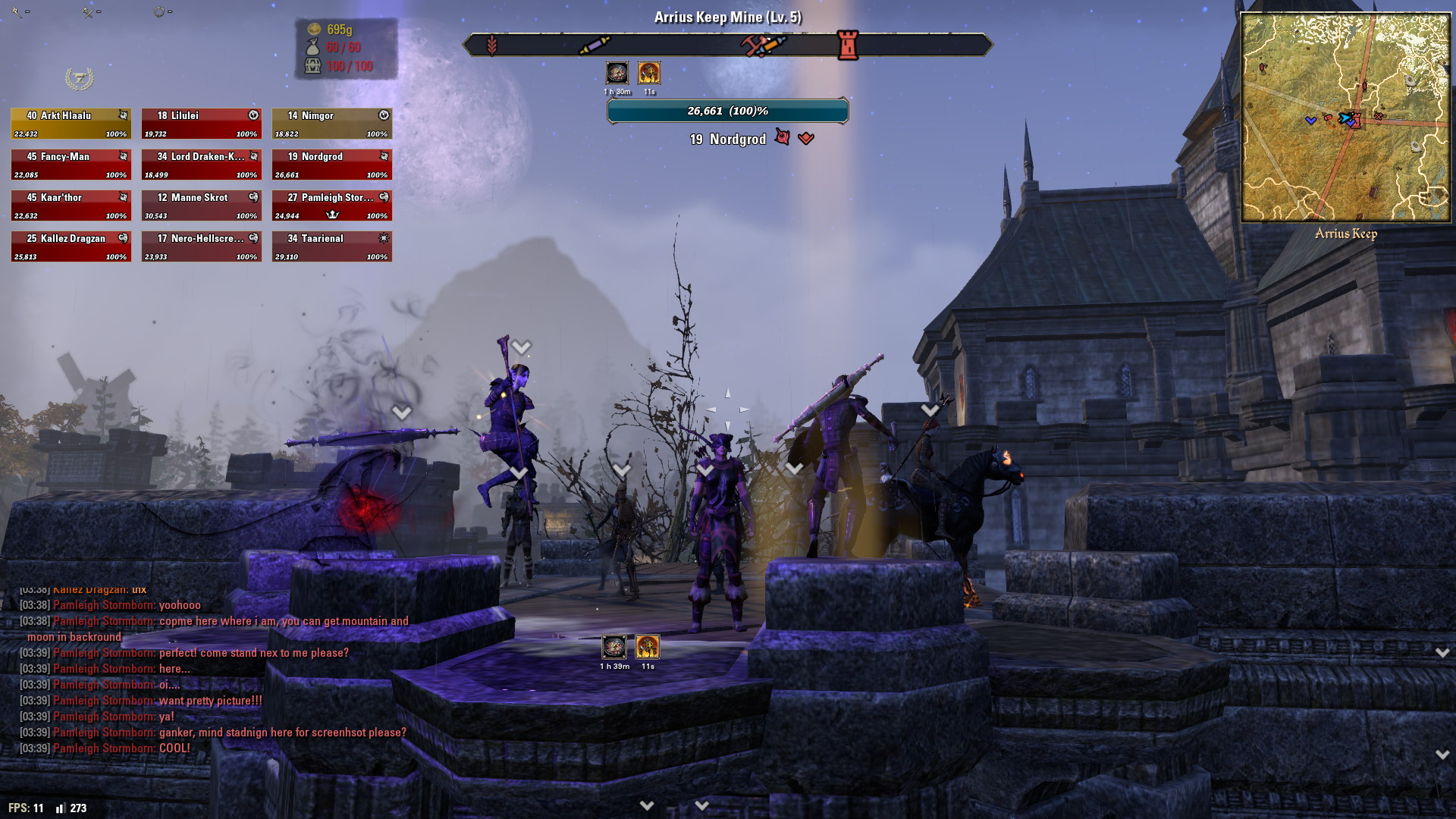 So at this point, im looking at the map, everybody else logs off, and i notice our Very Own CrazyBarSteward (active toon Fancy-Man) is 2nd on the board with 4 other Storm members in the top 10, and 24 in top 50!, and he's online, and he's about 100k AP from the current leader....and...he's online!!! But, bsy with some junk refered to as PvE.

So we set the poor man to repairing things like mad, as there were only like 6 DC left online and we couldnt find them! Slowly...slowly...he moves up...with about 20k left, the DC get inspired and 6 of them attack Ralyes! Woohoo! Over an hour they tried 4 times to take that place, happened to be their top ranked players too! So kiling one gav you about 1500AP! I furthered things along by running at them with Horsie as killing an enemy with kills under his belt raises the AP, hehehe, but turns out that wasnt needed, as Our Emp In Waiting is a goddam killing machine! Twice myself and Nodjo the Mad Swede (only 4 of us at this time) were wiped and he was alone top floor, took all 6 out solo! Now here, we have a deserving emp I'm thinking....

While they were hitting us fro the 5th time, I prepped Aleswell, Nodjo volunteered to hold them as distraction with sieges, which he did a STIRLING job of! While Crafty, who had just logged on, a friendly Pug called Jhagho, myself and Fancy flattened the Final Emp Keep with the help of Major somethign and Maximus Pointy Long beard i think? The whole time....

....I'm stressing....are we going to have a sudden guild influx and get wiped, will the other chap log on and juuust tip the scales losing number 1 postion? Will we wipe on flag!! TWO CAMPS! PUT DOWN TWO CAMPS! Omg i was so excited and stressed and worried and proud and thirlled and.... 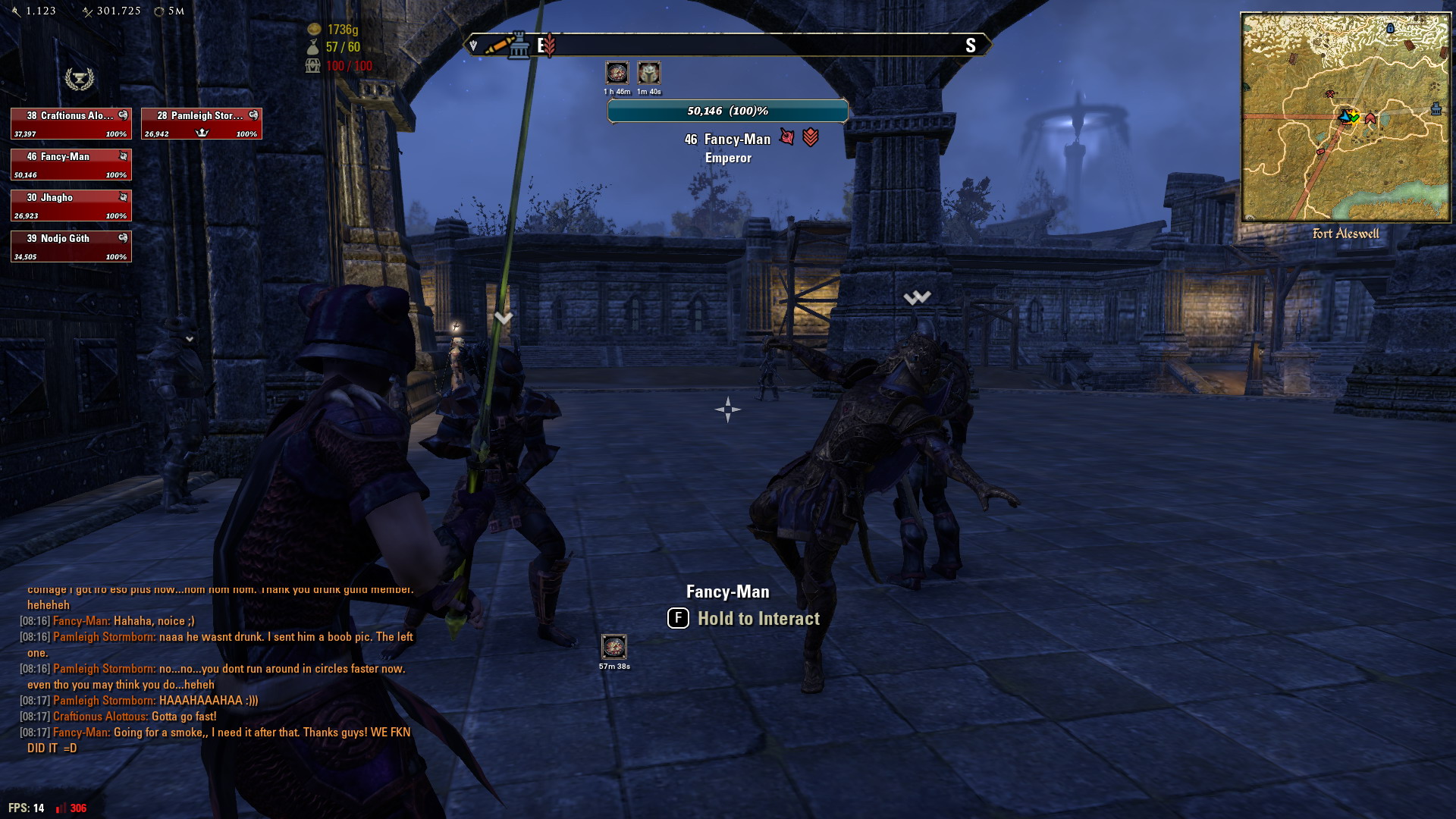 WOW! CONGRATULATIONS CrazyBarStewrd! And thnk you to all who helped us get there! Storming around! Woohoooooo!
3 Likes
Share

andychal1234 3y ago
going to add ya on steam pam if ya dont mind proper shit ya cant get in game if ya find ya self in any other mmo let me know sure some of us ill come keep ya company :-)
1 Like

asp11 3y ago
Pam,the pc version is still still using the 32 bit client, which I understand is still on dx9, I believe it is only the 64 bit client that requires dx11, so you should be ok to carry on as is until you are able to upgrade your card
1 Like

QueenPammie 3y ago
Nope, no DX9 support at all, and to run the 64bit client you have to manually launch the eso64.exe anyway, so everybody is running 32bit still by default ;) I get crash to desktop, unless I use a wrapper, then its so slow it times out before getting to the toon selection screen. So no go 😡

And yeah Andy I'm in SWTOR, my two guilds there now get to see more of me, not just the mornings anymore ;)
0 Likes

Whilhelmina 3y ago
Good luck Pam.
I guess you already tried to switch to openGL instead of DX?
0 Likes

QueenPammie 3y ago
Ya i tried that, as well as every trick in the book as well as a few written underneath the desk, all to no avail. Bottom line > Need DX11 card > gotta wait till i get 100% mobile and can work again > Earliest is August. << Fuck.
0 Likes